"It is a privilege to endorse Dan Spainhour’s coaching and teaching ability. I have found him to not only be extremely knowledgeable about the game but he also has an amazing way of communicating with youngsters. It is a great combination!”--Mike Krzyzewski, Head Coach Duke University

"Dan Spainhour is someone I've known for over 15 years. His teaching ability, his care for young people and his passion for the game of basketball make him a special coach” --Jerry Wainwright

Easily find quotes that cover an exact moment of your season—whether it’s during practice, preparing for the big game or building confidence after a loss. Brilliantly organized into 14 files according to your season—not by generic topics. Dan Spainhour shares his quotes from over 30 years of coaching experience. The book is separated in files representing Spainhour's organization system used to collect quotes and motivational sayings throughout his career. You will find more than 2000 opinions, insights, and wits of wisdom to motivate your team and help you stay competitive. It will be your go-to resource season after season!

A Few Athletic Programs That Have Purchased A Season In Words

What Others Say About A Season In Words

" I still use this book as a resource for my scouts and practice plans." --Stan Jones, Associate Head Coach, Florida State Basketball​

"Should be a tool in every coach's arsenal. My two favorite books are Jay Bilas' Toughness and Dan Spainhour's A Season In Words" --Mike Murphy, Head Coach Colgate Lacrosse.

"You can count West Point Lacrosse as a program that has purchased this book-excellent resource!
All the best."--Joe Alberici, Head Coach Army Lacrosse

"What a fantastic book you put together, I use it almost daily for our quotes and thoughts of the day, the internet sites are so generic and repetitive it gets old, but yours are fresh and very well done!!"--Steve Treffiletti

"Thanks for the great gift for my husband, the coach!" Cene Gibson, Oklahoma City

Basketball Sense Magazine's Review of A Season In Words
Inevitably, every coach will hunger for the right words when trying to communicate with his team, especially in certain situations. Whether the situation is before a big game, after a loss, while overcoming adversity, or otherwise, articulating the right idea in words can be most important in the ongoing drive for success. There is always a need for saying the right thing at the right time.
In a departure from the norm, Dan Spainhour organized A Season in Words to correspond directly with how a sports season is played out, beginning to end. Similar to the teams he coached, nothing is lost to organization. This manual, filled with over 2000 opinions, insights, and wits of wisdom, provides a coach with quotes and motivational words for every conceivable situation or problem that could be confronted in a given season.
Spainhour collected these words throughout his 30-year coaching career. What were his sources? "Some read, some given, some heard and possibly some even made up."We all have seen numerous publications filled with motivational and inspiring quotes. A Season in Words separates itself from the others with the number and depth of its quotes and with the highly organized 14 situations that the manual focuses on.
A Season in Words is a practical tool that could aid any coach as he communicates with his team. 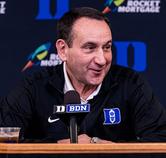 ​“Dan Spainhour is a terrific coach and educator. I had the pleasure of working several years with him, and I know that his knowledge and enthusiasm are first-rate.” --Tommy Amaker, Head Coach Harvard University

Get Your Copy Today!

Want to easily copy and paste the quotes into your practice plan?

"Dan Spainhour is an excellent basketball coach. He has a tremendous understanding of the game. His teaching ability makes him one of the finest coaches in the game.” --Leonard Hamilton, Head Coach Florida State University

Thank you for subscribing. You will receive your first edition soon.
View on Mobile