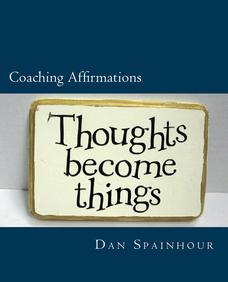 "Your imagination is your preview of life's coming attractions." Albert Einstein

When I used to hear all the talk about affirmations, I had a tendency to think of some New Age feel good stuff that had little to do with coaching. However, the more I investigated the process of affirmations I came to realize maybe it was only the term affirmations that caused me not to take the process seriously. I mean I’ve always believed in the importance of self-talk and the effects it has on performance. Like most coaches, I posted daily quotes in our locker room for the team to read and recite back during practice. I know motivation is different things for different people and athletes need inspiration that is designed specifically for them. I also believed as Peter Davies says, “Motivation is like food for the brain, you cannot get enough in one setting.” So I started to give my players specific individual statements I asked them to say to themselves over and over. I would give them new statements at different times throughout the year based upon areas that I wanted to see them improve. I immediately saw results. My players seem more confident and our performance has improved since I instituted this process.

An affirmation is a self-statement spoken in the present tense about a goal that has the possibility of being realized. It is a premeditated statement of an objective you would like to reach. It is presented and said as if the goal has already been reached. It is said in the present tense even though you know the goal is to be obtained in the future. It is basically mental programming. Affirmations are terrific behavior modifiers. They can be used to cancel out or correct previous negative thoughts or actions. Negative thoughts are the source of a lack of confidence, fear, frustration and inhibition.

From The Back Page

​It is my hope that doors open for you this year and every year beyond. Good things can and will happen to you—you must believe it though. Every thought you think and every word you say is in fact an affirmation. You’re using affirmations every moment whether you know it or not. Thoughts are affirmations. The thing to keep in mind is that feelings mean much more than words. Some may affirm aloud my life is going great but then think to themselves this is weird, I know it won’t work. Both are affirmations—one verbalized and one thought. Which affirmation do you think will win out? The complaining affirmations will win, because they’re usually said with great feeling. So pay special attention to how you are feeling when you make affirmations. If the feeling is negative do all you can to change those into something positive. Remember a belief is just a thought you keep thinking!

Thank you for subscribing. You will receive your first edition soon.