After 26 seasons as a head coach, Dan Spainhour is ready for the next chapter

175: Dan Spainhour 34 Year High School and College Coach, Founder of The Leadership Publishing Team, and Curator of the Coaching and Leadership Journal

Dan Spainhour and Florida State at the ACC tournament in Greensboro, NC

Thank you for subscribing. You will receive your first edition soon.

Spainhour “Evolving” to the next phase
Courtesy of The Stokes News
KING – West Stokes boys’ basketball team is coming off its best season in the program’s history and Coach Dan Spainhour is using it as a stepping stone into the next phase of his life. After coaching in the surrounding communities for nearly 45 years, the 60-year old coach will retire from teaching and coaching effective at the end of the school year in June.

During his 26 years as a head basketball coach, he has accumulated an overall record of 483-253 with 308 wins coming at West Stokes and has been named coach of the year 14 times. He was a recipient of the Governor’s Laurel Wreath Award as an Ambassador of Athletics in the State of North Carolina.

“I’m very thankful and grateful to have spent a big apart of my career in Stokes County and my home,” said Spainhour. “This is not a full retirement; it’s evolving into the next phase on whatever that is. It’s a new season, and it’s time for me to explore other opportunities. I enjoy and love coaching, but will my retirement be around the game of basketball, I’m not sure, it’s still to be determined.”

Spainhour’s path to coaching started at the age of 15 when his mother Diane would drive him to basketball practice not to play, but to coach in the what was then known as the King Youth Basketball League (KYBL) and in today’s time SCYBL.

“I’ve always felt like I had a gift to be able to inspire people’s learning of the game,” added Spainhour. “I think it was a calling. It’s something I always knew I wanted to do for as long as I could remember.”

Spainhour graduated from South Stokes High in 1978 and then High Point College (University) in 1982. He started his coaching career as an assistant at Bishop McGuinness High School with Mike Palma, who played at Wake Forest and Iona Universities, and Jim Corrigan, who played at Duke and is currently the associate head coach of the Duke’s women team. In 1987 he became the head basketball coach for the Villains and earned 175 wins in nine seasons, while averaging 19 wins a season with two state championship runner-up trophies.

During his tenure with the Villains, Spainhour was also slated as the head baseball coach for eight seasons. His teams won eight conference championships and three state championships in 1986, 87, and 88. He was voted coach of the year six times during that stretch and also started coaching current West Stokes’ principal and his brother Kevin in baseball for four years and basketball for two.

“First off, Dan and West Stokes basketball go hand and hand,” added the principal. “He established the foundation, culture, and the expectations of the program when the school first opened. When he returned in 2007 from a four-year hiatus, he picked right up where he left off and it was like he had never left.

“Dan is a very big part of who I am today from when I was coaching at Mount Airy High School, to when I became an administrator in Stokes County Schools at West Stokes, and a big part of who I am as a leader is a direct reflection of my experience with him as my coach. He has had a tremendous impact on so many people and is a great model of what leadership truly is. He always preached to us as players that you knew when it was time to move from one season to next and he called those the “Seasons of Life.” We started talking back in December and he knew it was time for him to move into the next season and I believe he is at peace with that decision.”

After leaving Bishop McGuinness, the coach ended up at East Burke High School where he had his first of two losing seasons in his coaching career. He left Burke County after one season and headed for Miami University where he earned his master’s degree and became a graduate assistant for the basketball team from 1996 to 1998 under Florida State’s current head basketball coach, Leonard Hamilton. From Miami he left for home and became West Stokes’ first athletic director and boys’ basketball coach in 1999.

While at West Stokes, he reunited with Forrest Munden, an athlete he helped coach in his first year at Bishop McGuinness. The two spent four years together along with Kevin, as the JV boy’s coach, and another Spainhour brother David.

“I’ve had some great assistant coaches by my side for the majority of years I have coached, most notably Forrest,” echoed Dan. “Forrest and my brothers were an extension of me and without their influence on me and the program; we would have never been as successful as we have been.”

After spending four years at West, Spainhour felt a calling to get back into the college ranks with aspirations of coaching at the next level. Hamilton accepted the head coaching position at Florida State, so the two reunited with Spainhour eventually becoming the universities head of basketball operations for a little over a year and a half. After missing the slide lines, he made his way back home to Stokes County in 2007 with Munden and his brother David joining his side.

“A lot of people thought I was crazy to leave Florida State and the ACC,” stated Spainhour. “I missed being on the floor and coaching. I am forever grateful for Coach Hamilton for giving me an opportunity and if he gives me another one, I would certainly take it. But, I’ve always followed my instincts and look at all of the stuff that has happened since I’ve been back. I’ve had the opportunity to work with a lot of great principals including my brother Kevin. He is an excellent leader and then to be able to coach my nephews and the quality of kids over the years, that has been special.”

“I just felt this was the right group to go out with,” Spainhour added. “To be able to coach my nephew Isaac through and finish like we did, I just knew it was time for me to move on and explore other opportunities.”

Until Spainhour figures what he will evolve to, he will continue writing and publishing his monthly coaching journal he created in 2011 with his company, The Leadership Publishing Team. He is the author of four books that he has written on coaching, leadership, and motivational quotes that he has collected over the years.

If nothing transpires the coach stated that he and his wife Cara of 22-years would eventually like move back to Florida and enjoy living the retirement life. 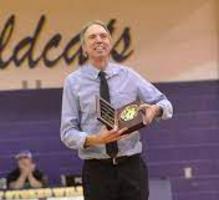 Dan Spainhour in the news